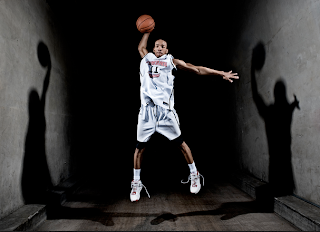 For months and months, people have been clamoring to find out how L.A.-based sports shooter Dustin Snipes managed to produce 70 stunning portraits of basketball players in an insanely short amount of time. He had given the lighting details earlier, but now he has lifted the veil on his simple but powerful post-processing technique.

"I always planned on sharing it with everyone but just haven’t had time to put anything together until now. Recently, I was asked to do a guest post for Scott’s blog and thought, “What better way to share this Photoshop tip with everyone than on Mr. Photoshop himself’s blog, Scott Kelby?” I was pretty giddy, to say the least.

We're the ones who are giddy. It's all here. Thanks, Dustin.