A new photo blog at the Times 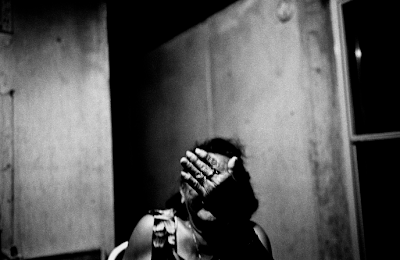 (Photo by Danny Wilcox Frazier)
The New York Times has launched a new photo blog, and, as you would expect, it's extremely well-executed. The navigation is simple and clear, the quality of the photos is stunning, and the ambition of the photographers and the photography is high.

That's all to the good.

An editor of mine once said that the toughest thing about putting out a newspaper was not deciding what to put in it, but deciding what to leave out. But we'll take the positive view that the web provides a place for what otherwise not might find a home. And we applaud the efforts of the people at the Times who did the hard work of launching the site, and it'll be a regular stop on our daily web visits.

More on the site from Photo District News, here.
Posted by John Curley No comments: 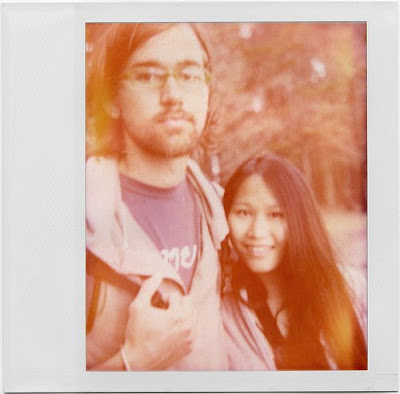 So, it's Polaroid Week over on Flickr, and it's one of my favorite weeks of the year. (Actually, it happens twice a year, but why be anal about it?) At any rate, all the people who love the qualities of instant film show off some of their best work, and it's really a treat. It's amazing, really, how good the quality is, which is true of Flickr overall. Yes, there are plenty of professionals who look down their noses at the site, but no matter. I think more and more pros are coming to realize what a resource it is, and that image buyers regularly go there and find the things they need.

But we were talking about 'Roid Week 2009. You'll find photos shot with 680s and Spectras and Swingers and Land cameras, and films like TIme Zero and Image and Fuji 100c. It's another one of the fine qualites of Flickr in general: If you want to learn about shooting instant film, there is an amazing amount of knowledge available, for free, from dedicated, generous photographers. Want to find out how to manipulate an SX-70 print? No problem. Want to see what happens if you pour a bleaching agent on some integral film? Here's a ton of examples. Ok, so I am a bit of a proselytizer when it comes to Flickr. So shoot me. But how many books do you think you'd have to buy, and how much searching would you have to do, to come even close to what's available to you with just a few clicks on Flickr?

Alright, end of speechifying. I really did want to talk about one thing in particular about shooting instant film, and especially expired instant film: The results are always unpredictable. You never know exactly how the next roll is going to behave, and you only get to play with its particular characteristics for 10 shots, because then the roll is over and it's on to the next one. But that's the beauty of it: The photographs are completely unique, and cannot be duplicated, and they won't ever happen in the same way again. You can't reproduce the results, and that's going to drive some people crazy. But I think of it as photographic jazz: Sometimes it just happens, and it's perfect.

That's not to say that the shot I posted above is perfect. Hell no. But it does have the qualities I look for with expired film, ones that suit the subject particularly well in this case. I was walking in the forest above the Fitzgerald Marine Reserve along the San Mateo Coast in Northern California. The reserve is a particularly wonderful place, both for the tidepools and harbor seals at the shoreline, but also for the forest of evergreens up above the coast on the bluff overlooking the beach. I go there more than I want to admit. And every time I go there, I find something new. 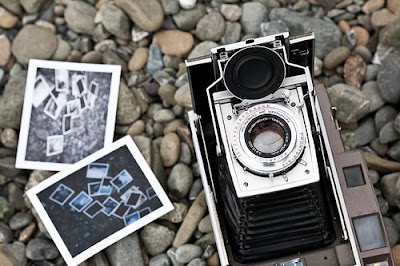 A couple of days ago, I was walking along at dusk, carrying a converted Polaroid 110a on a tripod. A young couple passed me on the trail, and as they passed by, they turned around to look at the camera. So I stopped and we chatted about cameras and Polaroids and the fact that yes, you CAN still buy instant film (from Fuji), and maybe, maybe, the Impossible Project will somehow succeed and some of the great Polaroid formulas will be manufactured again. The two of them, Nathan and Jamie, couldn't have been sweeter or more curious or more enthusiastic. Just really nice kids. So then I asked if I could take their picture, because they both had a timeless look about them. Well, by timeless I mean, they looked like I could have known them in college, and that's another thing I don't want to admit, just how long ago that was.

So the photo I took this week looks like it could have been shoved in a box back then, and maybe now I came across it as I was going through some old stuff in the attic, along with some patchouli oil and tie-dyed shirts and some stems and sticks from the Woodstock trip. (And I say this all very lovingly, without a trace of sarcasm. I wasn't a real hippie, I didn't grow up on a commune or anything, but I always thought the hippies were the folks with the biggest hearts. I'm naive that way.)

So that's what Polaroid Week and expired film can do for me. And it can do it for you, too, if you like. 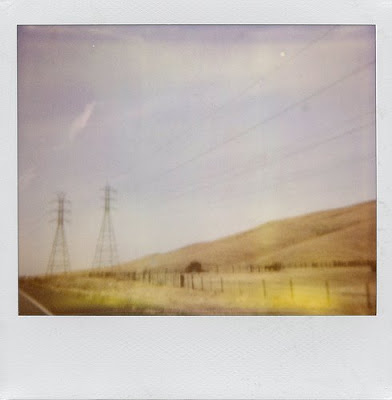