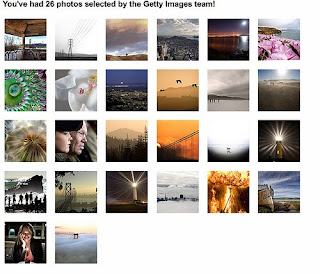 For a couple of months, some photographers on Flickr have been getting siren calls from Getty Images, asking if they would be interested in letting the agency include selected photographs of theirs in its collection.

Getting a tap on the shoulder from Getty is heady stuff for amateurs and hobbyists dreaming of turning pro. But the deal isn't for everyone; Getty is insisting on two years of exclusivity, meaning, if someone else comes along and would like to use one of your photos, sorry, that's not allowed. Also, the revenue split has raised some hackles, too.

But at its core, the deal is a watershed moment for stock photography, and maybe for photography in general. A photo sharing site, Flickr, has partnered with a leading supplier of photographic images, Getty, to make thousands of images from primarily non-professional photographers available to potential buyers.

I got the invitation more than a month ago and was ambivalent about the terms of the deal. I asked for help on Flickr, and the outpouring of opinion was amazing. You can read it here.

Thomas Hawk has an excellent summation of the deal and lots of links for further reading over here.
Posted by John Curley