8 years on the Bush beat 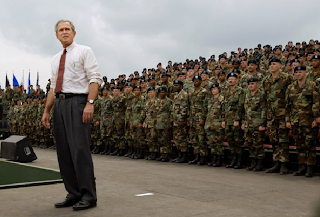 Time Magazine has a beautiful audio/visual piece on the Bush presidency, from the two photographers who covered W. for the magazine, Brooks Kraft and Christopher Morris. The photos are wonderful, but Kraft's fawning and simplistic commentary comes close to ruining the show.

"There was always something about (Bush when he was) alone that was very evocative. ... There was a sense, always, that Bush was a man of determination and resolve who would go it alone, regardless of the consequences." 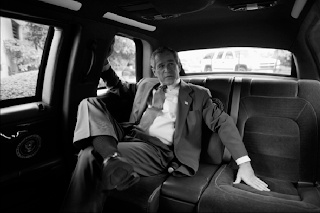 Morris, thankfully, is a lot less pompous. When he got the assignment from Time he wondered, "How am I going to photograph a man in a suit for many years to come?" After the attacks of 2001, he traveled around the country with Bush.

"I saw the real cult of personality that was building up around George W. Bush. ... It's something I had seen in other countries, this kind of nationalism and patriotism.... It was shocking to me, to see it in America."

Morris says Bush's emotional visit to a hospital in Bethesda to visit soldiers wounded in Iraq was his most memorable experience. He asked Bush how he could do it, and the president said, "I have to do it, because I sent them there."

Worth a look.
Posted by John Curley