His biggest fan, I guess 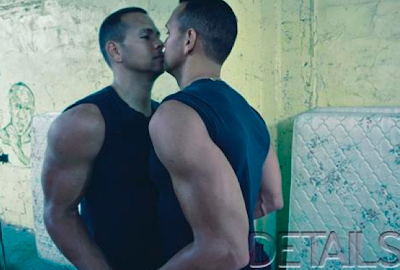 If you're not from New York, it's easy to hate the Yankees. And now you've got another reason: Alex Rodriguez's photo spread in Details. Sure, we've heard that he's narcissistic and self-centered, and we know he was in the steroid crowd. But he always seemed a little tortured, too, and that made him more appealing. He knows he'll never be Derek Jeter. He tanks in the playoffs. And he seems to want so desperately to be liked. Rodriguez Agonistes.

Lots of ballplayers aren't very complex, and that serves them well. You have to be mindless and be able to keep the self-esteem issues in check to play a sport where failing seven out of 10 times at the plate makes you a pretty good player. But Rodriguez doesn't seem mindless at all. It all seems to eat at him. So we thought he was kind of smart, too. We're less sure now. Why did he listen to ultra hot photog Steven Klein and agree to this pose? Was he just trying to please? Who knows.

One other thing: Rodriguez called the writer of the Details piece after the interview because he was worried about something he had said about his favorite Madonna song. Here's the amazing part: He was frantically trying to reach that writer the day after another writer, one from Sports Illustrated, had called him to talk about his positive drug test. So Rodgriguez knew his world was about to collapse, but he's thinking about a Madonna song. Just plain weird.

The story and the rest of the photos are over here.
Posted by John Curley