{howto} You can do this too 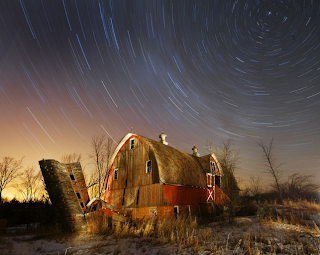 A 45-minute time exposure made for circular star tracks is seen over this run-down barn along County Road A near Iron River, Wis., Sunday night, Feb. 15, 2009. During the time exposure, the barn was lit with a battery powered spotlight using a technique called light painting. Photo by Nate Rendulich

Young photographer Nate Rendulich, a senior in high school, photographed this run-down barn near Iron River, Wis.. The photograph, which ran on the cover of the Duluth News Tribune’s Local news section and was distributed by the Associated Press, appeared in newspapers and Web sites around the world.

Want to try this at home? It's easier than you think. There are some great tutorials on painting with light available from DIY Photography and the Digital Photography School; you can also find tons of examples and inspiration on Flickr.