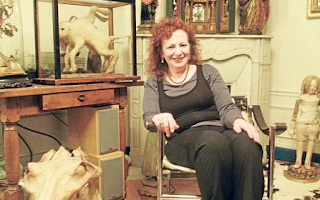 From an interesting but disturbing feature piece in the The Telegraph, in which Nan Goldin explains why she is selling some of the collectibles she has gathered for decades:

"I didn't want to get rid of any of it but I'm completely and totally without money," she says frankly, carrot-curled head held high.

From the start, she found other people's sexuality fascinating. Her two portraits of Bea – a drag-queen friend of hers – which are part of the sale, are typical of this: raw and unflinching, but affectionate at the same time. "Right now, I don't have much of a sexual life but I'm interested in other people's relationships and I feel closer to them when I photograph them – for me it's a sign of love. I've never taken a picture out of meanness," she says, exhaling smoke, "but maybe I should start."

It's a good read, and it's here.
Posted by John Curley