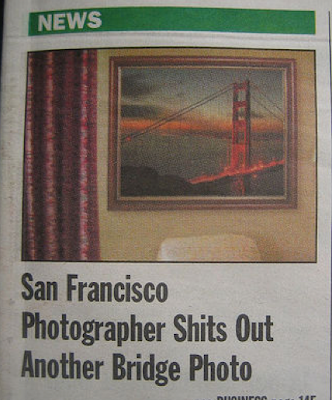 (photo is a detail from The Onion's first print edition in San Francisco four years ago. True then, true now.)
By "we" I mean San Francisco, and I suppose we could order a recount, but hey, it's just a silly poll. But still, Popular Photography went to some lengths to arrive at an allegedly "objective" list of the top photo cities in the United States. Here is their criteria:

To measure the differences, we compared the 30 most populous cities in the United States across 10 categories, including annual average percentage of sunny hours, number of days with measurable precipitation, per-capita number of camera shops and museums and galleries that exhibit photos. We even counted private security firms, since we’ve found that the more rent-a-cops, the harder it can be to take pictures in public.

Our sources? Municipal websites and federal databases from the National Oceanic and Atmospheric Administration, General Services Administration, Federal Bureau of Investigation, and Environmental Protection Agency, as well as private sources such as online yellow pages.

Among the things they said about San Francisco:

The onshore Pacific winds keep the East Bay smog in its place, allowing the cat-footed fog to drift through the treetops and bridge cables. And passing clouds and fog soften the light when you want lower contrast.

Which of course is a very nice way of saying it's often cold as hell, windy as the Senate chambers and probably overcast. But somehow, a lot of times, it just all works.

The complete list:
1) Denver
2) San Francisco
3) Austin (with a mention of the SXSW music festival)
4) Louisville
5) Jacksonville
6) Seattle
7) Fort Worth
8) Philadelphia
9) Dallas
10) San Jose (which of course proves the essential ridiculousness of lists like this.)

The complete story is here.
Posted by John Curley