It's almost not fair {gear}

Olympus unveiled its Micro Four Thirds camera today, and it has done nothing but produce a surge in camera lust.

You are probably familiar with the Four Thirds (and Micro Four Thirds) system: It is a line of cameras and interchangeable lenses that are meant to marry the size advantage of compact cameras and the quality images produced by DSLRs. So far, Panasonic has produced two Micro Four Thirds models, the Lumix DMC DH-1, which has HD video, plus the DMC G1, which is essentially the same camera but without video.

Now comes the Olympus version, the E-P1 and god it is sweet. 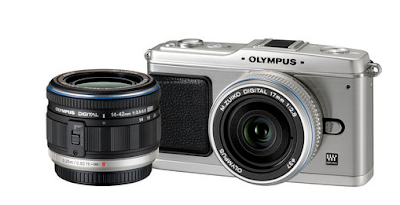 First there's the retro styling: It looks like the pocket film camera that Olympus introduced in 1959. From the company's release:

When Olympus launched the legendary Pen series of cameras in 1959, this bold and revolutionary achievement rewrote the history of photography. Designed by renowned style guru Yoshihisa Maitani, the Pen represented the perfect marriage of simplicity, style and performance.

But this camera is most definitely modern: 12 megapixels, image-stabilized, integrated dust-removal and a three-inch screen. It doesn't come cheap, though: The anticipated price for the body, which will be available next month, is $700. Olympus has also announced two lenses, a Zuiko 14mm-42mm f3.5-5.6 ($800) 3X zoom and a 17mm f2.8 ($900) prime.

What you've got here is a camera with a sensor about 9 times the size of a "normal" compact camera (with useable ISO up to 1600), plus some gorgeous lenses, and it all fits in a package that would fit nicely in a jacket pocket.