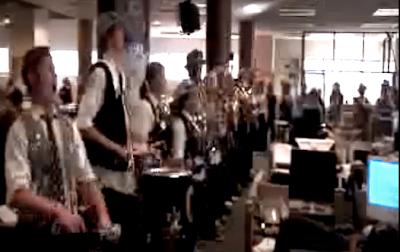 We depart from our irregularly scheduled programming to note that for 57 years, the Cal band has marched through the newsroom of the San Francisco Chronicle during Big Game week, part of the festivities leading up to its football game with archrival Stanford.

I'm not a sports nut, even though I was the sports editor of the Chronicle for 10 years (1987-1997). Maybe I was overly influenced by the line from Joseph Heller's Catch 22: ""Like Olympic medals and tennis trophies, all they signified was that the owner had done something of no benefit to anyone more capably than everyone else."

Whatever. I've always believed that the Bay Area has its sensibilities and priorities in order. While the Giants and 49ers have diehard loyalists, I don't think fans in the region can generally be characterized as "rabid." (I grew up outside New York and went to school in Boston, so I know from rabid.)

Still, every year when the Cal band came marching through the newsroom, I'd find to my own surprise that I'd get a lump in my throat. It all seemed wholesome and sweet and uncomplicated -- the traditions, the fun and, around here at least, a feeling that yeah, go ahead and have a blast, because the game is great, and it's worthy of respect and honor, but it's not life or death. Your life won't be changed in any significant way if your team wins or loses. And that's exactly the way it should be.

Now, though, there's the added poignancy of seeing a college football marching band in the context of tradition that's in decline -- the newspaper. Don't get me wrong: I don't believe that newspapers will go away. Well, maybe newspapers will go away, but not news operations, or news people. There will always be news, and there will always be demand for it. It's just the delivery system that's in a painful process of change.

Approximately 15,000 people lost their newspaper jobs in 2009 as a result of that change. And many lives have indeed changed in significant ways because of it. And there aren't any marching bands making note of it. But the game will go on, the news game, no doubt about it.
Posted by John Curley