Video shows Reuters photographers in Baghdad killed by US forces 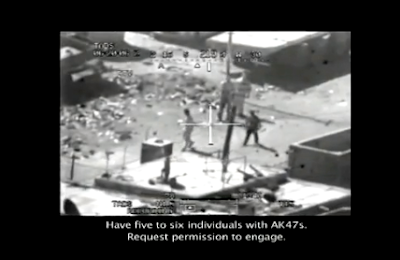 WikiLeaks acquired and today released classified military video footage that shows two Reuters photographers killed by fire from an Apache helicopter as the journalists carried their cameras in a Baghdad neighborhood.

About a dozen people were killed in the incident, and two children were also seriously wounded.

"After demands by Reuters, the incident was investigated and the U.S. military concluded that the actions of the soldiers were in accordance with the law of armed conflict and its own "Rules of Engagement".

"WikiLeaks wants to ensure that all the leaked information it receives gets the attention it deserves. In this particular case, some of the people killed were journalists that were simply doing their jobs: putting their lives at risk in order to report on war. Iraq is a very dangerous place for journalists: from 2003- 2009, 139 journalists were killed while doing their work."

More discussion of the video is here, and at the NYTimes, among many other places.