The Indianapolis Star had a funny photo illustration of Coach K at Duke, but then they stopped the presses

Yes, it's hard to root for the Duke University basketball team if you didn't go to school there. The school is expensive, the kids are really smart, and someday they'll likely be your boss.

But maybe more than anything, Duke wins a lot. It's a little like rooting for the Yankees, or U.S. Steel.

On Monday night Duke won its fourth national championship under coach Mike Krzyzewski, and in the process ruined the storybook season of the Butler Bulldogs, the little school (4,200-enrollment) that made it all the way to the NCAA championship game.

The Indianapolis Star ran a story last Friday that pointed out how easy it was to root against Duke. The art department created an illustration for the story that looked like someone had doodled all over Coach K's face. But the illustration only ran in only the early editions of the paper. One of the upper executives of the paper, alerted by staffers, decided that the illustration didn't meet the paper's "standards," and he ordered it pulled. Here's what they ran in later editions: 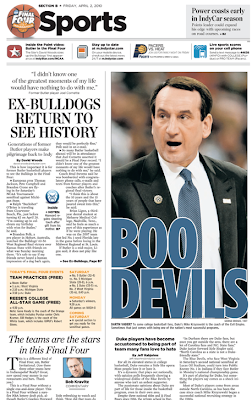 Coach K called the first illustration "juvenile," and he's right. But then, what's he going to say?

And I know I'm a bad person and all, but I really like the first illustration a lot better. It was fresh and original, not tired and familiar like the second one. And which illustration might make you more likely to read the story? It seems harmless enough to me, and it had the kind of creative verve that newspapers could use right now.

And I'd bet the Duke students themselves might have thought it was funny. They are famously clever fans, and on Monday night, as the sportscasters set up the game, there was one student in the background crowd holding up a hand-made poster that said, "Distracting Poster."

So here's to you, nameless art department person who created the original illustration. Go Bulldogs.
Posted by John Curley