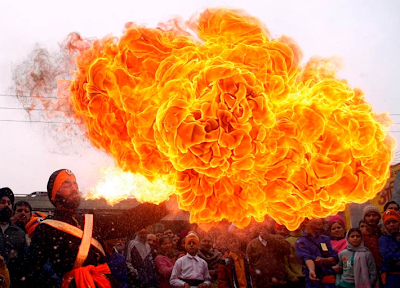 I like pictures of fire, and I know how difficult they are to take. There are many more misses than hits, at least in my experience.

But this is just simply one of the best I've ever seen.

It's from National Geographic and was shot in Jammu, India. Devotees of Sikhism, the world's fifth largest organized religion, were marking the 342nd birthday of Guru Gobind Singh, a founder of the faith, in July. The photo was taken by Jaipal Singh and distributed through EPA/Corbis. The photographer has a photostream on Flickr, where he posts a lot of his photojournalism work.
Posted by John Curley