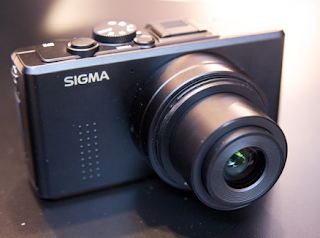 One of the most interesting point and shoot cameras may soon be getting an update.

Sigma has let some writers get a look at a pre-production DP2, the successor to its much-admired DP1. The highlights would seem to be an extended focal range, plus a higher ISO (from 800 to 3200) and menus that make more sense.

The DP1 has a sensor that's much larger than other point-and-shoots, one that's almost the same size as those found in non-full-frame dSLRs, resulting in much higher image quality. From DPR's review of the DP1:

The DP1's forte is no doubt the image quality at low sensitivities. The camera offers a resolution and an amount of detail that is unheard of in the compact camera sector and can keep up with quite a few DSLRs. To make the most of it you have to shoot in RAW though. The DP1's JPEG output is very desaturated and flat and needs a 'boost' in post processing.

For more about the DP2, here's RichardK reporting for SigmaUser.eu from Focus on Imaging.