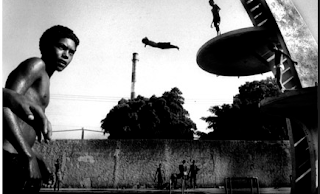 We went to see and hear the amazing Ernesto Bazan talk the other night at UC Berkeley's J-School, where a wonderful collection of photographs from his recently released book, "Cuba" is on display.

It's not hard to figure out why Bazan has been such a successful workshop leader. He is gracious and encouraging, and he just seems to speak from the heart. He stopped and talked with us in the hallway as we looked at the photos on display, and he was very funny about modern cameras, and how much he still likes film.

A student had showed up at one of his workshops with a Nikon D-700, and he marvelled at its low-light capabilities. But he hasn't gone digital yet. For one thing, he can get his Canon film cameras and lenses more cheaply than ever before. "No one wants them!" He's also been experiementing with an Xpan of late, and he loves it.


If you are in the Bay Area, go see the prints. They're just wonderful. Beautiful. They have all the grainy, gritty realism that Tri-X can offer.

And if you are not in the area, buy the book. It's pricey at $85, but one of the reasons it costs so much is that they used the most sophisticated printing and papers available to get the deepest and richest blacks on the pages. Bazan said later that he was amazed at how far the publishing world has come in being able to reproduce the deep rich blacks of a halide print, and the book is good evidence of that.

Also, the book is a way of allowing a true documentary photographer like Bazan to keep working. He spent 14 years in Cuba, during the "Special Time" after the collapse of the Soviet Union. It was a time of great hardship for the people of the island, and Bazan gives an unbelievably intimate look at of the people. We were all amazed at how so many of his subjects seemed so completely unaware of his presence. It was like a camera had dropped into the middle of their lives 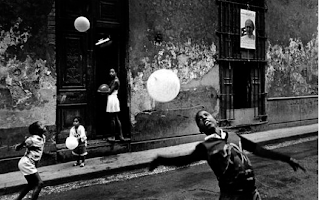 . But there is no secret, really, Bazan said, to how he got so close to his subjects. "You just have to spend time with them." He did, and it shows.

The photos are a far cry from the photojournalism produced when photographers parachute into a area hit by calamity -- wars, famine, hurricanes. That's not to diminish the importance of photojournalism. But Bazan gives you a look at life as it is lived.

There is so much to see in his photos; there are layers and layers of content. Your eye might be caught by a grimacing face in the foreground, then a set of eyes a little further into the photo, then a marvelous texture behind them both, then perhaps a smokestack in the distance. It's like you are falling into the scene. Incredible, really.

The book is actually a collaboration; all the photos are Bazan's, but the selection and editing and layout took two years to complete. At the end of his workshops, after he had been "severe and harsh" with his students, Bazan let the tables turn and asked his students to look at his layouts and prints and offer opinions. There was no lack of them. He credits 50 people with helping produce the book. "I have no idea what the book might have been without them," he said.

You can see the prints at UC Berkeley's graduate school of journalism, at the corner of Hearst and Euclid. You can buy the book on Bazon's website. The program was presented in collaboration with Fotovision.
Posted by John Curley